Notice: Trying to access array offset on value of type null in /home/mastaloc/public_html/wp/wp-content/plugins/pagelayer/main/shortcode_functions.php on line 863

Notice: Trying to access array offset on value of type null in /home/mastaloc/public_html/wp/wp-content/plugins/pagelayer/main/shortcode_functions.php on line 863

They Were Cutting From Stone Some Dreams Of Their Own, But They Listened To Mine Anyway

These are professional works I created for various companies and projects I worked with over the years.

A teaser announcement in advance of mailing Benefits Guidebooks to retirees

A poster that announces Open Enrollment

Prior to being the Psych Department's lead IT Support, I was working part-time in IT for the Business Department

In keeping with the theme, these desktop wallpapers were used in the Psychology Department Computer Lab

Here's the stuff I did for fun, when I dreamt of being a famous artist one day. 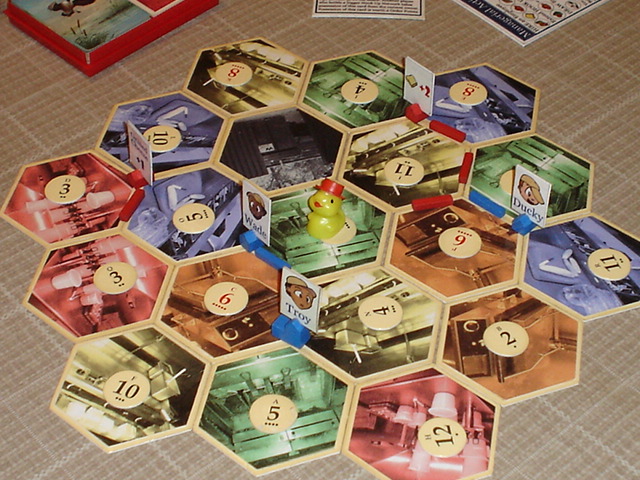 I made this game with my brothers called "Zaxby's Lunch Rush!!" and submitted it as Zaxby's Biggest Fan for them to produce. They said no, but gave me a $100 gift card to Zaxby's. I would've rather made a few million dollars, but I did enjoy all the fried pickles and Zax Sauce. Meanwhile I'm still trying to de-brand and publish this game myself. That takes a lot of time and social media savvy, but I'm a parent now, too old and busy for that crap. 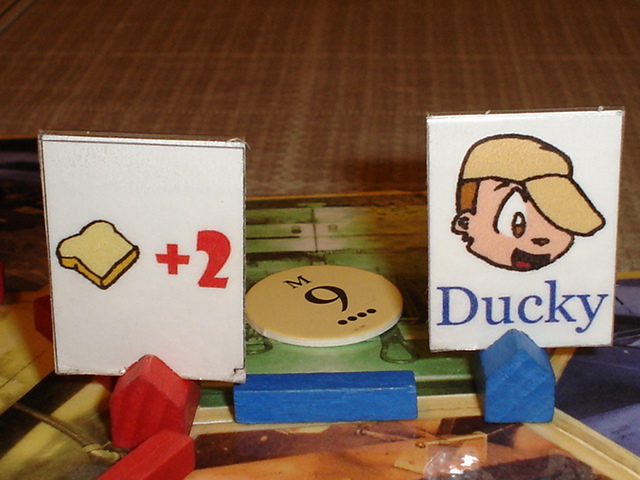 In a nutshell, ZLR!! plays like Magic: The Gathering, but uses a Settlers of Catan's territorial resource gathering mechanic to generate food as mana for your special moves. The basic attack is to order food from your opponent, which they must counterspell by fulfilling your order. Ducky here (my brother, who looks like Jon Cryer IRL) is +2 to chicken fingers on his reverse. I dunno who that guy with +2 to Toast is. Between them they could easily handle a Wings 'n Things (Finger, Finger, Finger, Finger, Wing, Toast, Table) every round. Unless some jerk counters it with "NO SLICED TOMS." 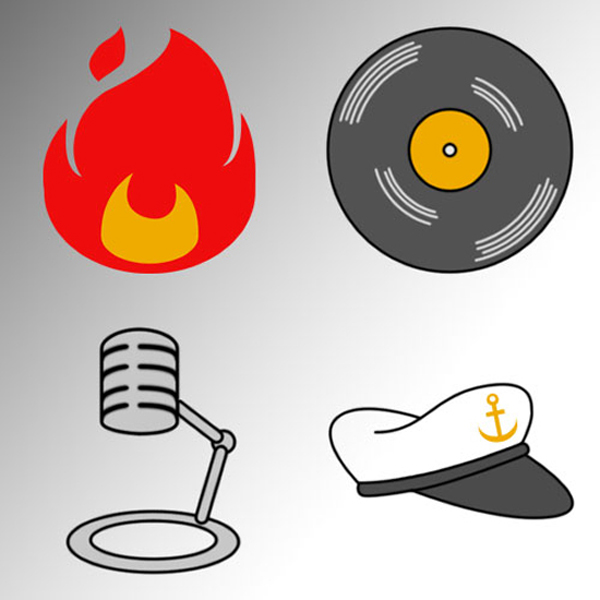 I also made a board game based on the popular web series "Yacht Rock" from Channel 101. These were the preliminary resource icons, from top: Pop (power to appeal to the lowest common denominator of music listeners), Album (one unit of sales toward winning the game), Rep (reputation among musicians, allowing you to form groups, like Michael McDonald joining the Doobie Brothers or Steely Dan), and Smooth (raw, juicy smoothitude). It was the first game I made that did not steal mechanics from existing board games, maybe I'll blog about it or some crap. 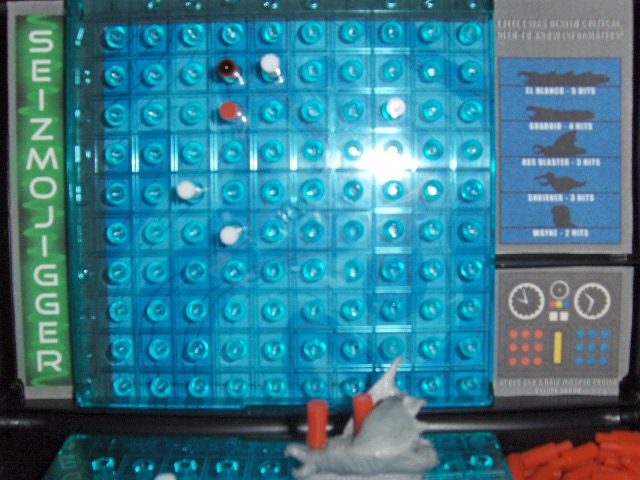 I removed my Battleship game's cardboard backing, scanned and Photoshopped it, then printed fresh copies onto cardstock and reinserted. My brother shaved off the surfaces of the boats with an Exact-O knife, I made clay graboid models, then we glue-gunned them on top. 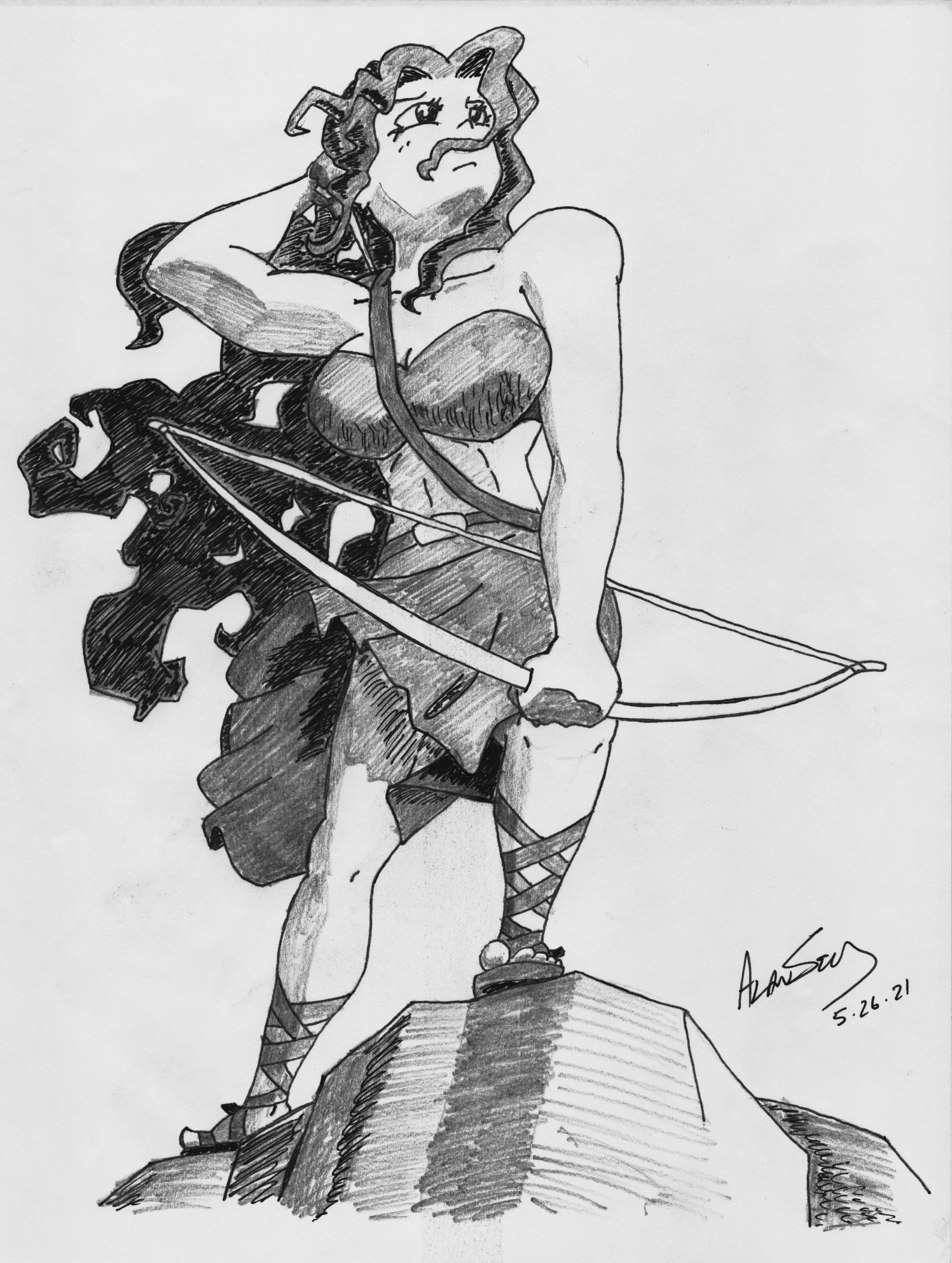 A sketch I made of Artemis, the Greek goddess, my kids' school mascot 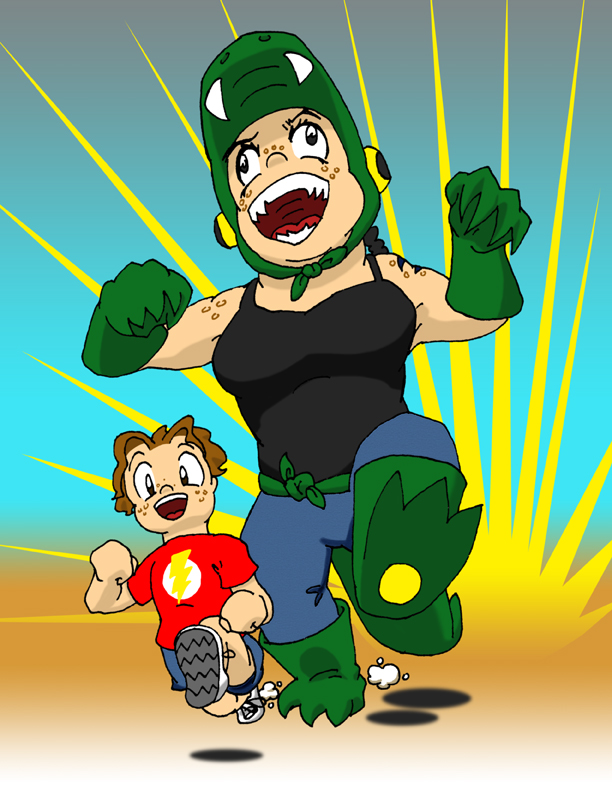 "Madonna and Child," my then-fianceé dressed as a raptor chasing her son down the hallway with terrifying glee. 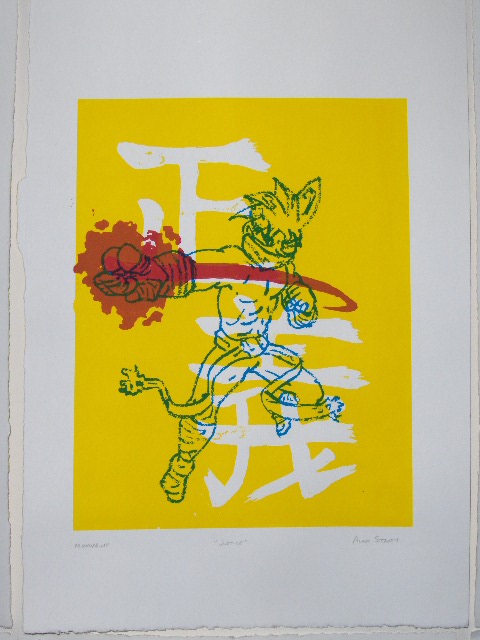 "Justice," a silkscreen series, 40 total made in unique color combinations. Kanji for "justice" with a ninja character "Adagio" from a web comic I never even produced called "Psion Prophecy." What a nerd I was. 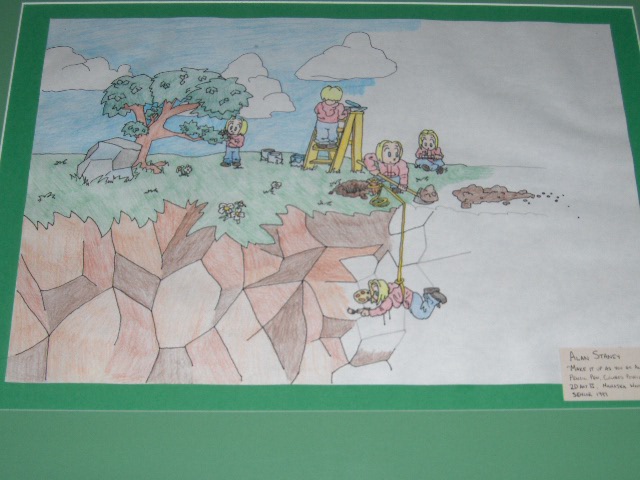 Some actual art I did in high school: "Make It Up As You Go Along." Yes my hair really looked like that back then. 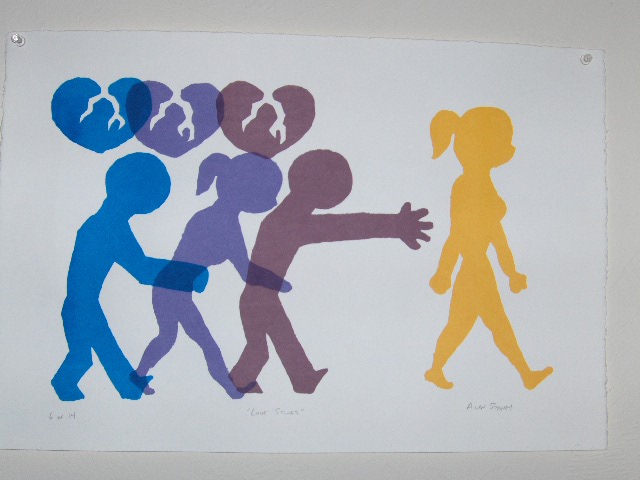 "Love Stinks," a silkscreen I made to sum up the emo sham of a social life I had in college. 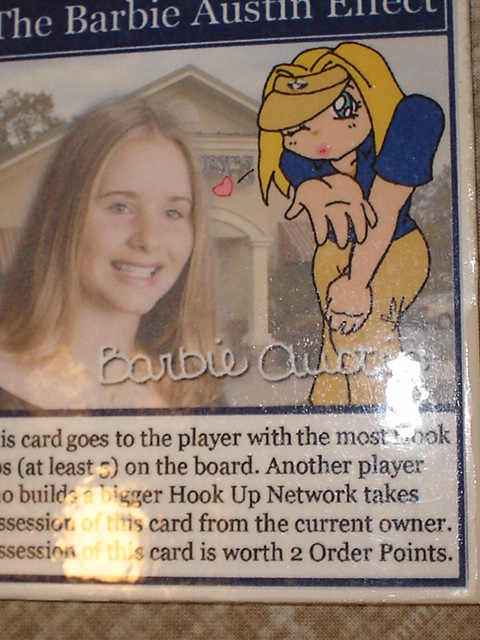 Zaxby's Lunch Rush!! Special Effect Card. This girl basically hooked everyone up with a job at Zaxby's. You get this card for having mad networking skillz. 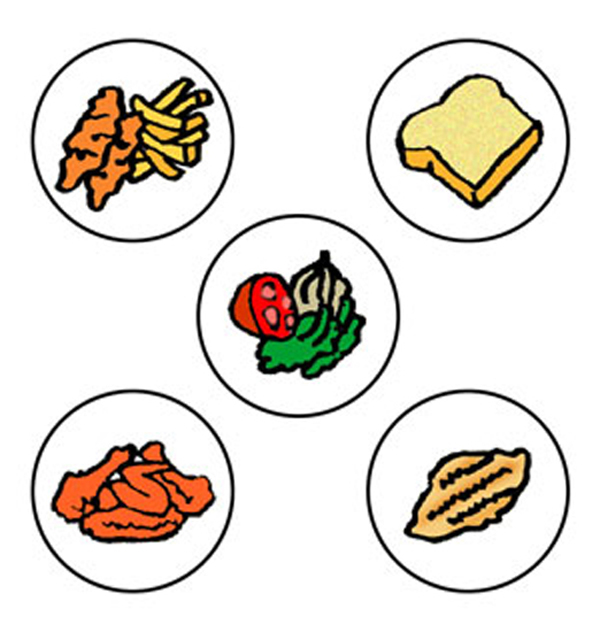 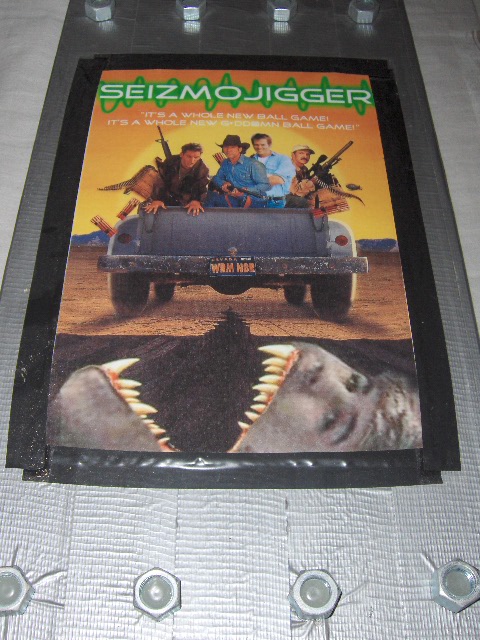 "Seizmojigger" is a clone of Battleship, the Milton Bradley Parker Brothers Hasbro game, but with a "Tremors" movie franchise theme. You can play as various characters who have different special abilities and moves, largely inspired by Advance Wars 2 on the GBA. 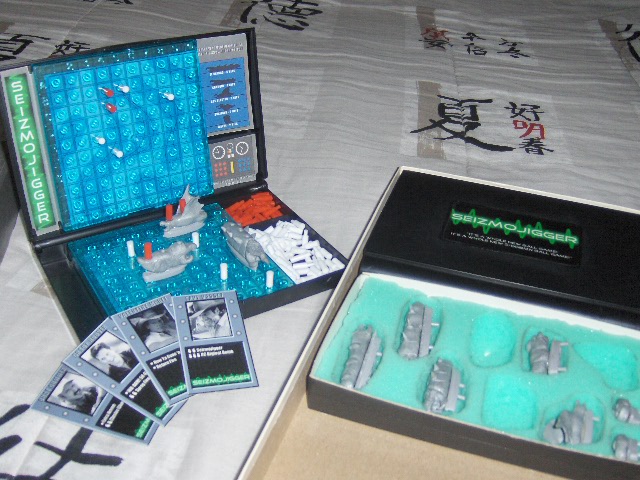 The characters are surprisingly well-balanced. I converted this into a C# .exe for my first programming project, you can find it at Seizmojigger.com where I'm now trying to make it a web-based online multiplayer game. 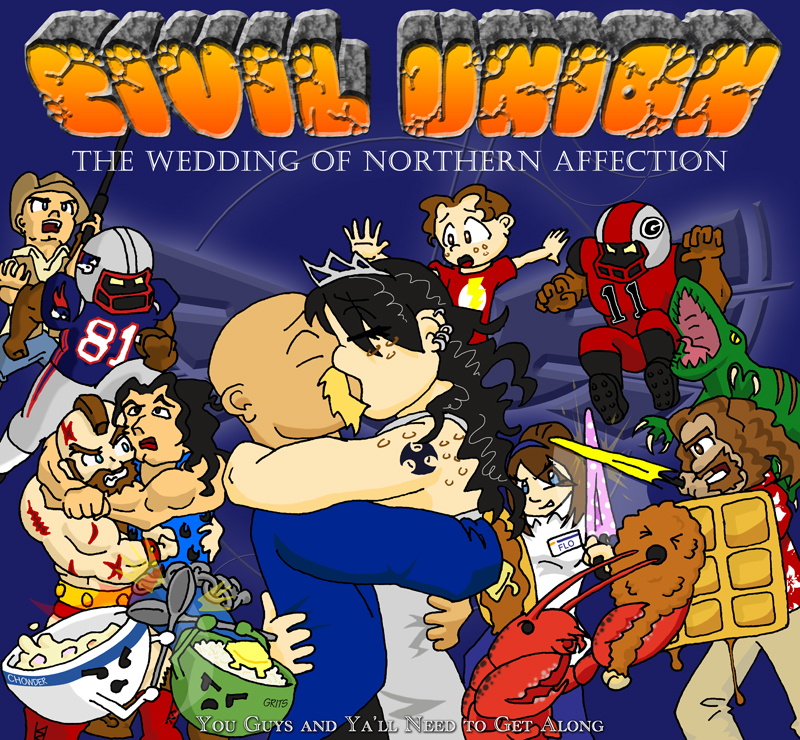 My darling wife actually let me design this movie poster as our wedding invitation! Our early relationship and getting to know our in-laws made for a barrage of cultural diffusion jokes, as her family is all from Georgia and mine is all from Massachussetts. Our wedding had a Civil War theme to really twist the knife, boys wore Union blue, girls wore Confederate gray. Her 5-year old was featured in the middle trying to break up fights, such as chowdah vs. grits, lobstah vs. chicken 'n waffles, and Flo from Progressive inSURance in an umBRELLa fight vs. the GEICO INsurance caveman with an UMbrella. Note also that the Patriots would never play the Bulldogs... This is deliberate: in New England, we watch pro ball, but in the south, college football is the local religion.

"Ryuu wa Chuugoku no Ryoori ni Natteimasu," is the title, meaning "Dragon Turning Into Chinese Food" in Japanese. He also changes from sumi-e ink to pastel in the process. Very pretentious, very weeaboo. 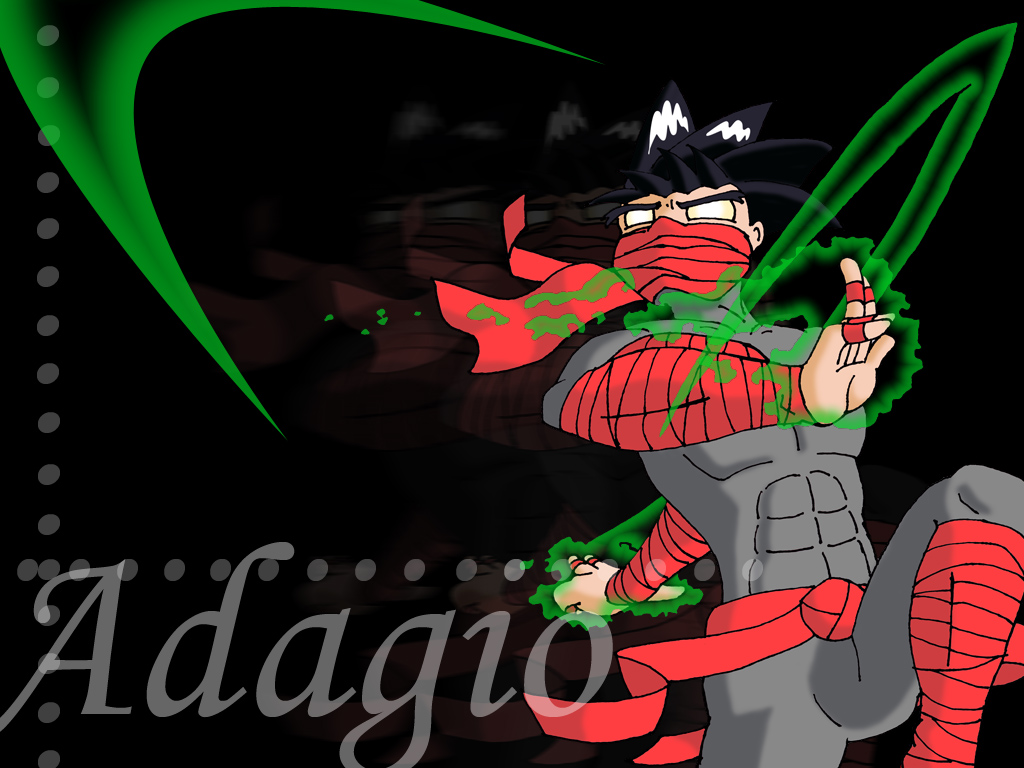 Heck, I even had desktop wallpapers ready to merchandise before I drew a single page! 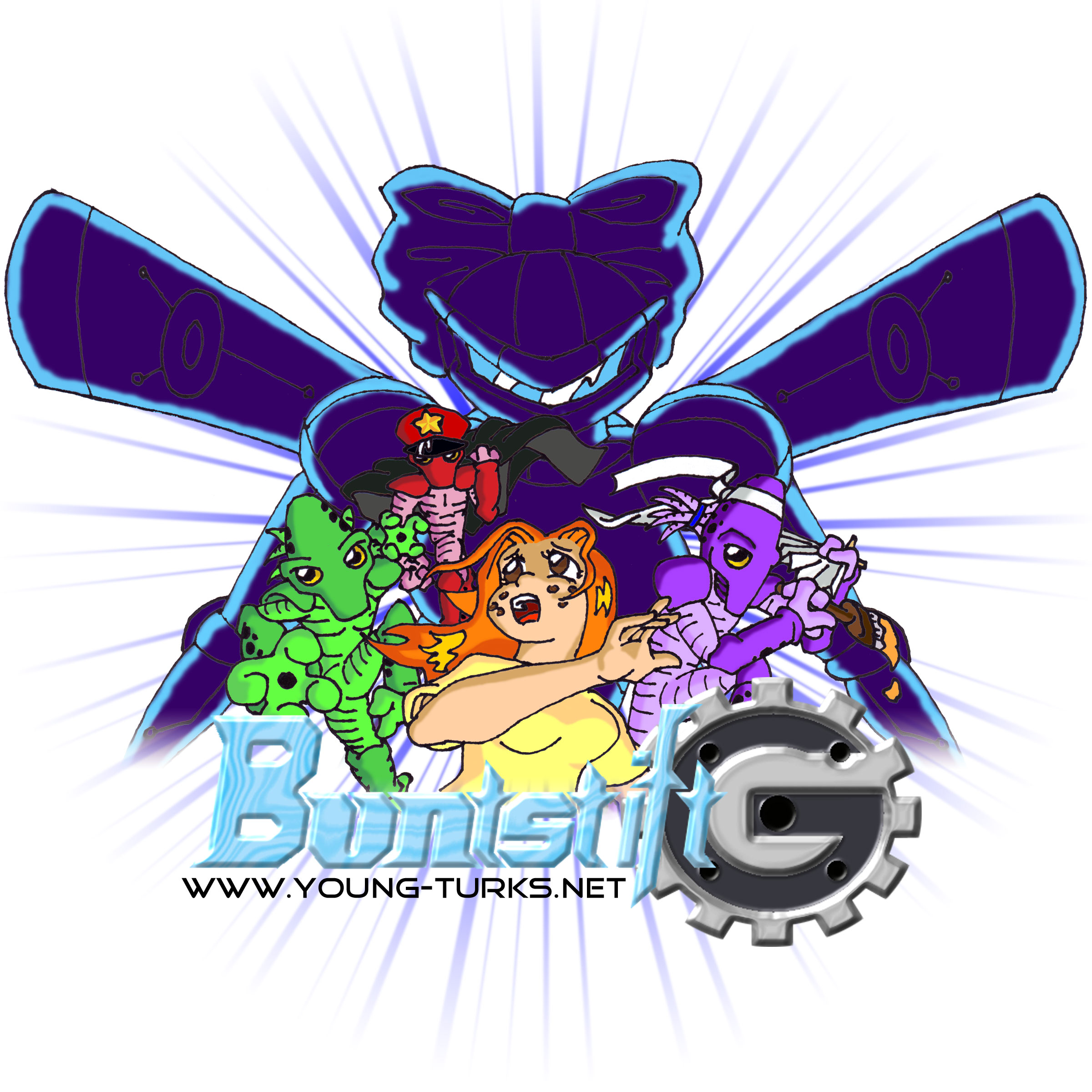 Now, I actually did draw about 60 pages of "Buntstift G" before I ran out of steam, this was going to be the cover and was my website's splash page. It was a typical giant robot (or "mecha") manga, high school girl saves the world from paint-stealing colorful aliens that are triple-jointed and speak German. I wanted to lampoon "Engrish," the Japanese habit of constantly borrowing English terms often resulting in great unintentional humor. It happens in many cultures of course, how many Americans actually know what their Chinese tattoo says? So to avoid harping entirely on the Japanese, I picked German out of a hat. The alients would say things like "Wo ist deine Schule?" and it would be subtitled "Take me to your leader!" etc. 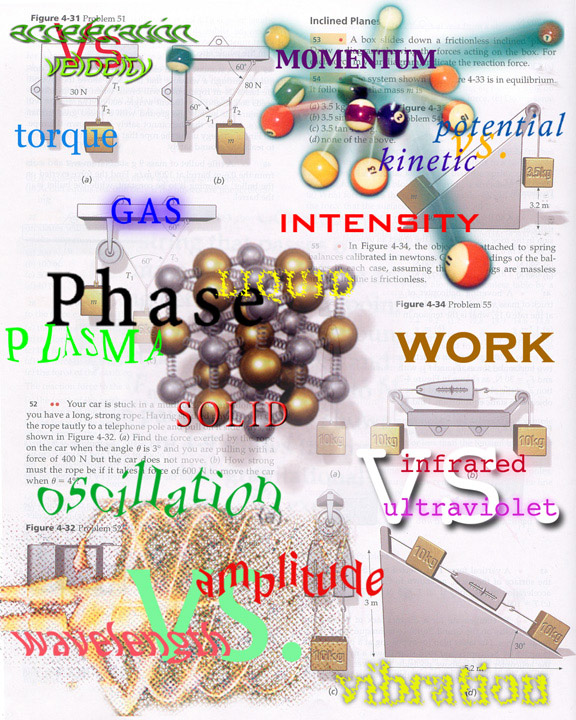 A scientific term collage I made as one of my first "serious" experiments with Photoshop, after having my first actual class on it, 3 versions into having used it all the time as an amateur.